A couple months ago, a friend and I were sitting on my couch. We had brewed tea and I was listening to his heart aches.

Stories were told. I was there for him because I consider him as a friend and that’s “what friends do.”

We also exchanged a …

Routines are to the psychological self what a skeleton is to the biological body.

Self-help gurus like to rave about routines. For good reason: for every follower who hasn’t yet found structure, adopting even the slightest form of routine can yield dramatic improvements in one’s quality of life …

This explains why I noticed an upsurge …

Something Happened! With a capital “S.”

For the first time in forever, a reading caught my attention — by surprise, nonetheless.

In a nutshell, last Sunday afternoon I came across a blog via a repost, indirectly. I read one article, then one thing led to another, and then it was evening …

Today, at this small hour of the night, a window opened through the shell.

As I told you, I wish the world was different, I truly do.

My friend Mei-Li, of business and artistic fame, invited me to her birthday party yesterday. She thus offered me the opportunity to meet and mingle with a social group which was both new and afar from my usual crowd.

As expected by social protocol, strangers were fast-tracking to acquaintances by …

“One way to understand neurodiversity is to think in terms of human operating systems. Just because a PC is not running Windows, doesn’t mean that it’s broken. By autistic standards, the ‘normal’ human brain is easily distractable, obsessively social, and suffers from a deficit of attention to detail …

So some emotional impairment makes me unable to have a simple conversation with a neurotypical person, which makes all social interactions rather complicated.

“God knows,” said the mother to her child merely suspected to misbehave. “He knows, and he is watching you.” And so she hoped to induce shame and fear, and, indirectly, alter her child’s behavior.

Another word of power that I have learned to master in the last two years is cognitive bandwidth.

“Watch your language!” — I know what this sentence means colloquially in English. English is not my native tongue. I know no equivalent phrase in any other language I speak.

Before looking at the future, briefly look at the past.

Like achievements in video games, the true meaning of some words can only be truly understood after years of experience.

For as long as this man could walk, this man had a limp. A defect of the leg, or perhaps of the side; this man never stood upright, he saw the world either upright from his knees or slanted when standing up. This man could see taller men; men who …

Last Friday, an interviewer asked me how I would describe myself.

I stammered: “I’m not exactly sure how to answer that.” So she turned the question around: “How would your friends describe you?”

To be honest, I wonder the same. My current close friends are not very verbose on …

“affection, sympathy, empathy, honesty, altruism, mutual understanding, enjoyment of each other’s company, trust, and the ability to be oneself, express one’s feelings, and make mistakes without fear of judgement from the friend.”

Affection: an objective feeling of bonding emerging from heightened levels of oxytocin and conditioned by repeated …

The end scene of Mary Poppins sprang to mind as I began to write these lines: the wind turns, and it is time for Mary to leave. And so will I soon turn my back to Apple and Google as software providers.

My relationship with Apple is tumultuous and irregular …

My mom is a hoarder. Or maybe was. I don’t see her often. But she keeps stuff. She lives alone in a big house, and over the years she had accumulated enough stuff that she could start a bed & breakfast business, furnishing all her guest rooms with her accumulated …

Sometimes life gives you lemons. Then you make lemonade. Today, the lemonade is an act of sharing. Three of them.

Before you read the following paragraphs, do yourself a favour.

Read it? No? Then please read it. Otherwise this post will make no sense whatsoever …

In a story I read recently… 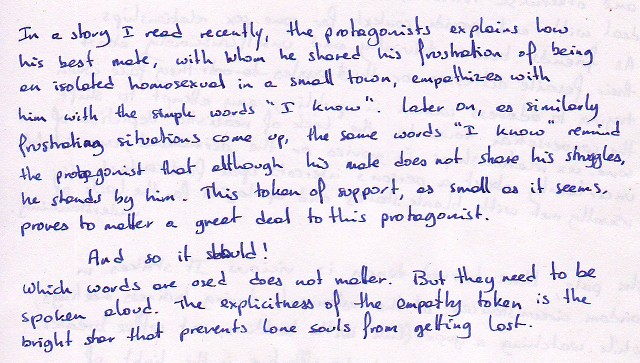 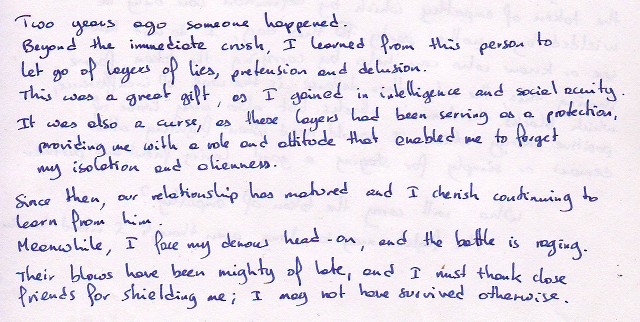 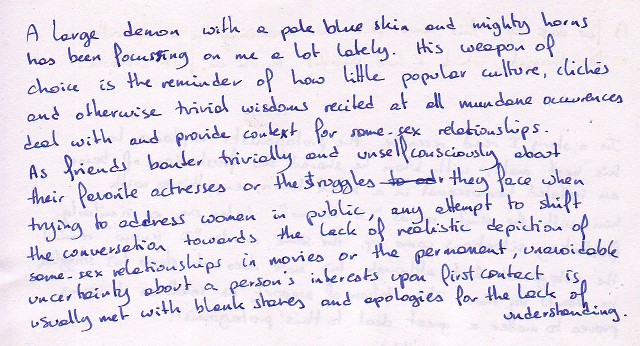 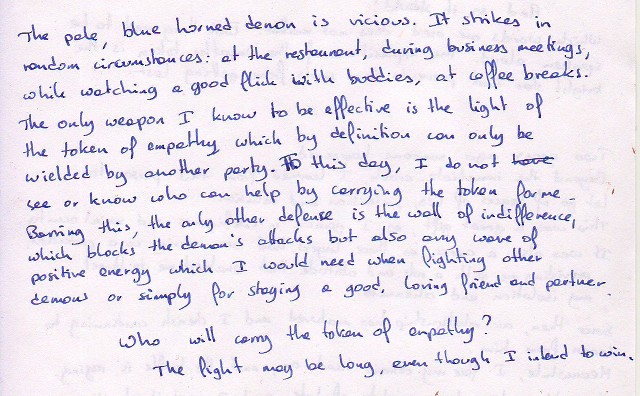 I hope this message finds you well. I am sorry I have not written for so long; sorry too we have not seen each other for nearly a year now. Yet I continue to think fondly of you, and the memory of our times together still warms up …

Whomever has enjoyed my company more than a few times will know I have a particular sensitivity to the adjective “normal” when used to qualify human behaviour. However, until today, I was at a loss when asked to properly explain why it grates me so much.

What makes today so …

A sad truth, but also a gem of an insight:

In some ways saying a man is gay is like saying he is white. That is meaningless. A red-haired Scot is white, but so are Armenians, Arabs and Italians. There is a wide range of physical types and appearances all …

Last week I implemented my first “useful” genetic algorithm (GA) to solve a mapping problem. Lesson learned: don’t mistake “good solution according to the algorithm” with “good solution to the problem.”

Two weeks ago, I learned that my research group will trade one large room for two smaller rooms …

September 5th, that was last week. Photos and videos were made. But I was not really there.

(It was reminded that I write a lot. It is thus fitting that I would deliver an epilogue in writing as well.)

“the clothes were really nice. the event was impressive.”

A dear friend yesterday shared his quest to sharpen his understanding of philosophical concepts by studying their opposites. Like one can better understand light by acknowledging darkness, it seems to him that much is to be learned about wealth, power, comfort, safety and liberty by considering what they are not …

My friend Julieta [had] this weird idea of writing 25 random facts about herself, and asked some of her friends (including me) to do the same.

This is a repost from a previous entry, updated after 3 years. Deleted text from the previous version is mentioned for reference but stricken …

Functional programming at the start of curricula 2012-07-24

Should functional programming be taught early in computer science curricula? For example as the first topic upon entering higher education? I have often thought about this and could “feel” it was a good idea without being able to articulate why. I was mostly stuck with ideas that it “fosters and …

You, there. You have exposed some rusty cogs in my thoughts processes, and I friendly despise you for that. The rest of the engine has awakened again by the way, after so many years of dusty oblivion; I guess I should thank you for that. But today there was something …

When you expressed last Friday your interest in my opinion about you trying to decide how to shape your future, I felt honored. Many thanks for trusting me; although I don’t believe you should trust me too much on this.

My musings from the past few days were an …

Two days ago, we considered together the difficulty to move forward, and we mulled over the question of “why.” Yesterday, I presented you the four-base model I had used so far to recognize the drive in other people.

You see, one aspect of my crisis is that I am not …

Yesterday, we saw that answering your “why” may be an important step to decide what you are going to do next. If you are anything like me, chances are it’s difficult for you too. Did you know different people have quite different answers to it?

Together, we recalled our …

What now? That was the question that kept a friend and myself busy over the telephone for about an hour yesterday.

We found that there are two main criteria to consider: who you interact with, and why you do what you do. We found also that “what”, “where” and “how …

Lately I have been entertaining myself in the evening by playing and replaying Diablo 3.

The general goal of the game is to save the world against evil forces; the means to achieve this goal is to slay said evil forces repeatedly, using combinations of magic, dexterity, strength, vitality and …

You probably wish you had seen the fine print on the package.

The hazard warnings were clearly indicated, in big letters. Annoyance awaits a particular human trait, or so you’d heard. Bullying, then discrimination, the occasional gratuitous violence, inequality before the law, administrative hassles, and whatnot. You heard the …

I had a shitty week-end.

Maybe not the shittiest week-end ever. There were two light point, namely the impromptu water art session on Saturday night and two hours of dance classes on Sunday. Just for that it was not all that bad.

Nevertheless, except for these few light hours, I …

Something is up, this is not my “normal” self. Lately I wake up often to vivid dreams; with rich imagery and rich scenarios, diversified in place, duration, characters, intensity, atmosphere, colors, moods. I did not use to dream this much.

Last night was an itinerary through a series of houses …

The scene takes place during daytime, at the frame of a door giving to a veranda in a wooden house. This must be a public place for there were a number of strangers around us. Two friends and I. Talking about past and recent achievements, one of them highlights that …

As the big “other” writing thing is nearly complete, time has come to resume over here.

Today’s question was what occupies my mind. The question came at the corner of a conversation where I had to hear first how “not transparent” I appear to be in my social interactions …

A hundred and sixty pages in eight weeks. Twenty pages per week. Four pages per day. This constitutes the challenge I have set for myself, to report my work activities of the past three years. The global view must be collected entirely in writing before October, because past that time …

Sharing is what makes people like each other. Exchanging gifts is the first form that comes to a child’s mind; grown ups know that real sharing happens when you do something you like and the person next to you happens to like it as well.

It was night, I was traveling and I arrived into some form of inn seeking shelter. In the midst of the crowd I was reflecting on my day’s experience and wondering how I could sleep. A party was going on and all the inn’s rooms were full, so …

Unsettling, surprising ways to learn about oneself.

As I am sitting here, a black ball of purring fur in my hoodie deciding whether to take its chance at staying on my lap in such an uncomfortable setting, I still wonder about how I will crystallize the train of though that …

Last sunday my mind decided against the will of my body and despite one night dancing out I was ended up biking from Amsterdam to Marken and back. Fifty kilometers and a few sunburns later, I felt strangely relaxed, surprised again by the merits of exercise on my psychological sanity …