All manners of self-help and “life hacking” sites promote programs and techniques to expand one’s boundaries of self-awareness or otherwise improve one’s compatibility with the real world (as opposed to the fantasy world that most people have built in their head). I think they are all unnecessary; there … 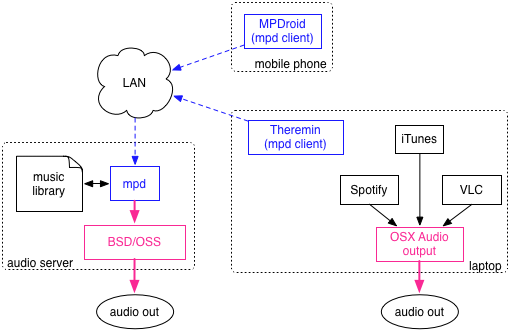 This diagram illustrates the use of the Music Player Daemon (MPD, wiki, wiki) on a centralized music library and audio output, with …

Something happened in the world of Minecraft; an opportunity to illustrate my favorite pet peeve against “cloud storage”.

When someone opens their Google Mail interface, they will expect to see the same list of e-mails (or more) as they saw the last time they opened the interface, even possibly from …

I can’t seem to remember this analogy ever been used: digital information as fire.

The question “top or bottom?” can be answered with “versatile,” to mean “either, depending on circumstances.” Another possible answer is “interleaved.” Here’s an argument that the proper answer should be “both” to maximize satisfaction.

The main options [when replying to email] are interleaved posting, also called …

What criteria should one use to pick a job?

Most people would answer a combination of skills, salary and commute time.

My personal experience taught me that it is whom you work with, not what you do, how much you get nor where, which matters most.

You probably wish you had seen the fine print on the package.

The hazard warnings were clearly indicated, in big letters. Annoyance awaits a particular human trait, or so you’d heard. Bullying, then discrimination, the occasional gratuitous violence, inequality before the law, administrative hassles, and whatnot. You heard the …